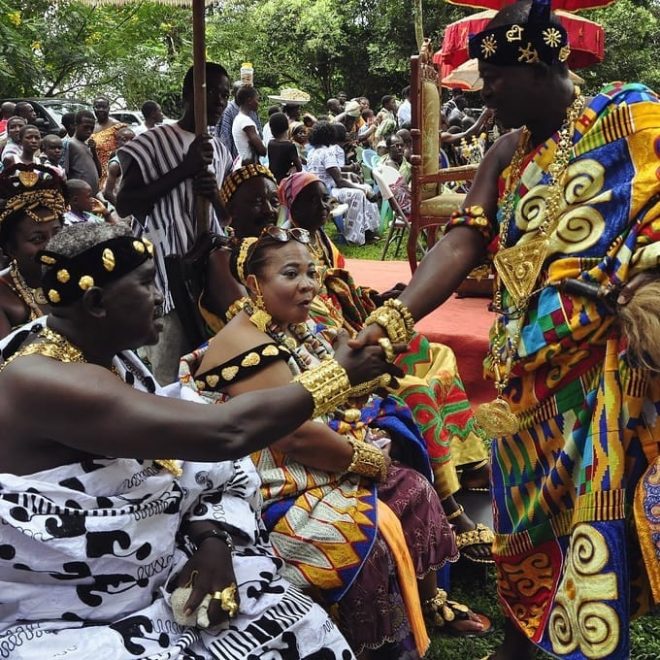 Ghana’s Eastern Region offers a diverse collection of stunning scenery, ancient artifacts, and traditional cultures. In this location so close to but so different from the rest of the country, the antique merges with the twentieth century Accra.
A festival is an event that is usually celebrated by a community and focuses on some part of that community’s religion or cultures. Aside from religion and folklore, agriculture is a key source. Harvest time is associated with many events because food is such a valuable resource.

The following are some of the festivals held in the Eastern Region.

In Akyem, it is commemorated (Abuakwa Traditional area).
Every two years, the festival is held. OhumKan and OhumKyire are two festivals held in June/July and September/October, respectively.

The Akyem Nation’s anniversary is marked by the worship of ancestral stools and the ghosts of people who once sat on them.
The festival also serves to commemorate the year’s first harvest (yam) and to ask for blessings for the next year.

The festival will take place over two days (Tuesday and Wednesday). Drumming, dancing, and generating noise are prohibited two weeks before the festival. Monday before Tuesday, bringing home the first crop of the year and ensuring that there is enough food in the house for the length of the festivities.

The celebration focuses on dramatizing Akwapem holy traditions, myths, and olden-day folklore passed down by the “Oman’s” ancestors. It entails re-enacting some of history’s more archaic occurrences, such as ancient warfare tactics. Path clearing to Amamprobi for ‘Safe’ travel home; relaxation of the forty-day noise prohibition; state mourning for departed souls; and feeding the ancestors at Nsorem are among the other events. There is also a magnificent chiefs’ cultural parade and a Grand Durbar. Music, dancing, and feasting are all heavily emphasized.

Nana Addo Dankwa 1(1811-1835), the 19th Omanhene of Akropong, founded the Akuapem Odwira festival, which was first held in October 1826. This came after Akwapem forces captured items (related to the Odwira celebration) from the previously unbeatable Ashanti army during the epic battle of Katamansu near Dodowa in 1826.

Manya and Yilo Krobo, in the cities of Krobo Odumase and Somanya, some 80 kilometers north of Accra, celebrate Dipo in April.

Adolescent girls are dressed half-clothed and decked with stunning beads as part of the festivity. The celebration ushers these young ladies into womanhood.

Every year in the first week of November, the Chiefs and people of the New Juaben Traditional Area commemorate this celebration.

It is a time when black stools are consecrated, ancestral spirits are invoked for blessings, and the gods are thanked for their guidance.

The celebrations will be capped off with a colorful chiefs’ durbar.

This is the Krobo people’s traditional harvest and thanksgiving festival. It is observed by the inhabitants of Manya and Yilo Krobo between the months of March and April.

Its beginnings can be traced back to the British colonial government’s expulsion of the Krobos from the Krobo mountains in 1892.
Every year, an expedition to the summit of the mountain is held to pay honor to their ancestral home.