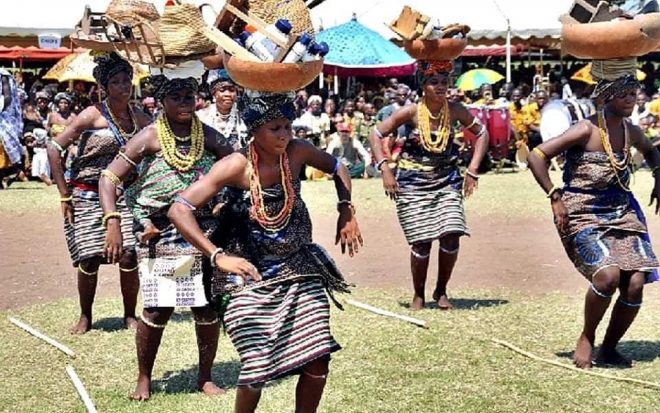 The Volta Region is known for its colorful festivals and boisterous celebrations. The inhabitants of Wli celebrate a one-of-a-kind holiday to praise God for the gift of water, while the Anlos celebrate the legendary Hogbetsotso festival (which translates to “festival of Exodus” in Ewe).

On the first Saturday in November, a cleansing ceremony is held, followed by several days of cleaning the villages, sweeping the streets, and burning trash. Locals perform the traditional Borborbor dance at the festival’s conclusion, while chiefs dress in colorful regalia and receive honor from their subjects. The Volta festivals’ joyful dancing and singing serve as a reminder of the region’s rich historical variety.

A large durbar of chiefs and people is held at Anloga, the traditional home of the Anlo–speaking Ewes, on the first Saturday of November every year. The durbar is an important feature of the Hogbetsotso festival, which takes place over a week and commemorates the Anlo – Ewes’ migration from the old walled city of Notsie in present–day Northern Togo to their current settlement. The festivity culminated in drumming and dancing to “Husago” while going “backwards,” ostensibly to flee their pursuers after they had escaped the tyranny of the wicked King Agorkoli.

Asogli Yam Festival (Teduduza) Of The People Of Ho

The chiefs and people of Asogli State, Ho, and its environs celebrate their annual yam festival every September. This is a harvest celebration in which people pay thanks to God, the lesser gods, and their ancestors for a plentiful harvest. It’s a time to pray for good health all year, prosperity for everybody, and the promotion of unity through forgiveness and reconciliation. Cooked mashed yam is sprinkled at several temples across the state as part of the festivity. After the gods have been served, everyone is allowed to sample the fresh yams. The paramount chief (Togbe Afede XIV) normally sits in state to receive homage from his sub-chiefs during a large durbar of chiefs. The festival is held every year.

Two weeks after the Anlo – Ewes celebrate Hogbetsotso (a week-long festival that culminates on the first Saturday in November), their relatives, the same Ewes, celebrate Keta – Sometutuza in Agbozume, their traditional residence. On a Saturday, a magnificent durbar of chiefs and their followers concludes this colorful feast of pomp and spectacle. Chiefs pay respect to their supreme leader and pledge their fealty to him.

Amu (Rice) Festival Of The People Of Vane

The celebration is a harvest festival because it is concentrated on the harvesting of rice, as the name implies. It is commemorated in Vane, the Avatime people’s traditional capital. It is observed in the last week of November to the first week of December. It draws a large number of visitors. The Avatime people, who came from the Ahanta districts of the Western Region, fought the indigenous inhabitants of the land they now call home, as evidenced by their drumming, dancing, and singing.

Every February, the chiefs and people of the Agave traditional territory gather in Dabala, their commercial center, to celebrate the annual Dzawuwu festival. It’s essentially a Thanksgiving celebration during which a special portion of food is offered to the gods. It also honors the valor of previous Agaves who fought and won numerous wars. It is time to pay respects to those who have passed away and pour libation for the people to renew their allegiance to their rulers. It culminates with a spectacular Durbar of chiefs. There is a lot of drumming and dancing.