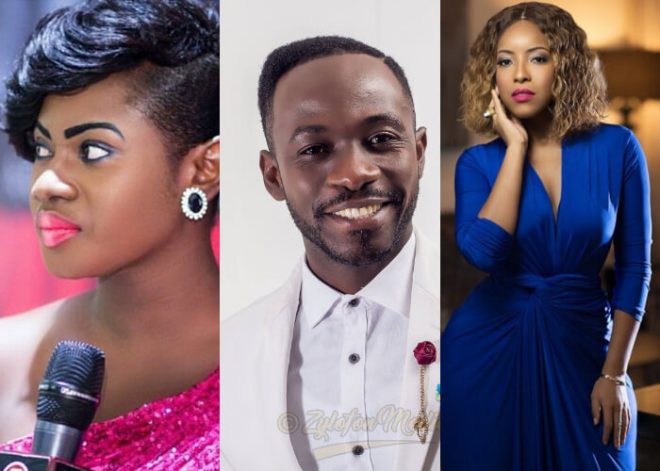 Taking a look social media networking sites such as Facebook, Twitter, LinkedIn and the rest — you can see how popular they are over the internet.

Instagram is one of the most popular social media platform over the internet after its emergence in the year 2010.

Since Instagram has become popular social media platform in Ghana, there are numerous celebrities that are taking the chance of the portal to make waves as celebrity influencers in Ghana.

In our today’s article list, I shall provide you with the Top 10 Celebrities That Are Instagram Influencers In Ghana.

Formely Stonebwoy, now called 1GAD in the Ghanaian music industry. Livingstone Etse Stekekla is one of the popular Instagram influencers you can find in Ghana.

Stonebwoy has his industry followers from some special categoties such as Entertainment, music, Art, Film, Music & Books, Celebrities.

Popularly known as Hajia 4 Real in the Ghanaian arts and entertainment industry, Mona Montage has more followers in Instagram from categories such as: Fashion, Modeling, Styling, Celebrities, Design, Hair & Beauty.

Mona Montrage has over 2.6 million Instagram followers with a 1.60% engagement rate in Ghana. If you are a celebrity lover or follow Mona Monatrage, Hajia 4 Real, then you can check out her Instagram handle: @hajia4reall

Another popular celebrity Instagram influencer in Ghana with over 2.4 million followers with individuals from industries such as Celebrities, Hair & Beauty, Fashion.

Popularly known as Berla Mundi, the television personality has been known to be well known influencer in her industry. Berla Mundi is a TV news cater, program hostess, reporter and more — working at GH One TV.

Rebecca Acheampong is known to be an Africa woman since she started her music career — after contesting for TV3 Mentor in Ghana.

Becca in popular in the Ghanaian music industry under the Arts & Entertainment industry, and she is one of the popular Instagram influencer in Ghana.

Becca has over 2.4 million followers on her Instagram channel with 0.80% engagement rate from some popular industries such as; Songwriting, Celebrities, Technology, Humor.

Salma Mumin is a Ghanaian actress. Her contributions to the Ghanaian movie industry have earned her several accolades, including Best International New Actress at the 2014 Papyrus Magazine Screen Actors Awards and Best Actress in a Leading Role at the 2019 Ghana Movie Awards.

Salma Mumin is one of the most followed female celebrities in Ghana on Instagram.

Salma Mumin has over 1.8 million Instagram followers with 0.4% engagement rate contributing to the growth of her Instagram channel.

Whenever you mention the musician ‘OK’, there’s nothing that goes into the minds of Ghanaians than the legend rapper — Okyeame Kwame.

He is regarded as the 6th most followed Instagram celebrities with a lot of influence in Ghana from categories such as: Singer, Music, Celebrities, Film, Music & Books, Education.

Desmond Kwesi Blackmore, known by his stage name D-Black, is a Ghanaian anglophone hip-hop and Afrobeat musician and entrepreneur from. Forbes Africa described him in their May 2019 issue as one of Ghana’s most successful music moguls and “a creative in the numbers game”.

Desmond Blackmore is a Ghanaian musician that has opened so many doors for other musicians in Ghana.

Benedicta Gafah is a Ghanaian actress and a film producer. She has been featured in both Ghallywood and Kumawood movies which includes “Mirror Girl”, “Azonto Ghost” and “April Fool”. She is a signee of Zylofon Media.

Benedicta Gafah is an actress, TV program show hostess with the nickname Empress.

When looking at another most followed female celebrity that is very influential in Ghana on Instagram, then look no further than the popular Ghanaian actress Benedicta Gafah.

The Masa hitmaker is known to be a Highlife Labels: Black Legendary Music — who started his music career for long and started activeness since 2012.

Bisa Kdei has over 1.7 million Instagram followers with 0.30% engagement rate from industries such as: Modeling, Film, Music & Books, Celebrities, Technology.

From the look of categories Serwaa Amihere gets her followers from, you can tell how much Ghanaians are following this TV presenter. You can follow Serwaa Amihere on her Instagram handle: @serwaaamihere

I am glad to provide you much information about the Top 10 Celebrities That Are Instagram Influencers In Ghana.

You are free to share our article to your friends and loved ones.