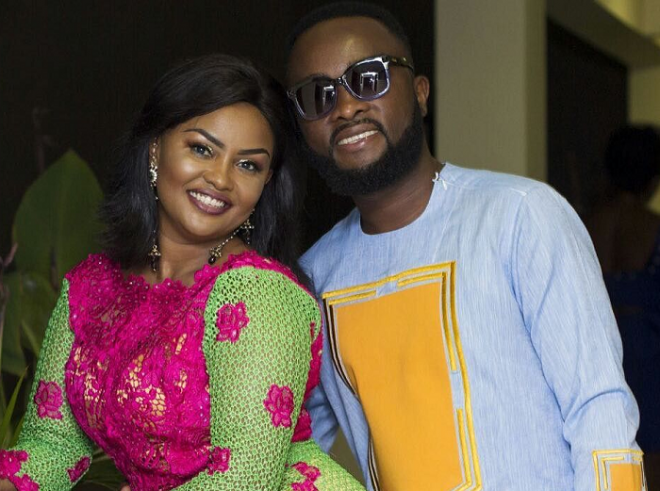 Nana Ama and Maxwell were put together in holy matrimony at a private wedding ceremony in Accra. It was a simple, classy, and colorful wedding ceremony strictly attended by families of the couple and very close friends.

Their engagement ceremony took place at her residence on Friday, August 5, 2016. Nana Ama McBrown and Maxwell Mensah exchanged their vows at their white wedding which took place on the same day at the Christ Apostolic Church at Alajo in Accra officiated by Rev. Felix Owusu Sekyere.

News went viral some months which suggested that Maxwell was not happy in his marriage and that he looks tensed and unenthusiastic when he’s in public with the celebrated actress.

In order words, he was being forced by Nana Ama to love her and appear with her at social events.

Recently, the pair attended the 20th issue of Glitz Magazine in Accra, and that was when Maxwell got wind of the rumor and started throwing tantrums.

“When I ‘m walking, I should just be talking for no reason?”, he asked rhetorically.

Maxwell suggested that he’s not mentally unstable to be walking and talking for no reason.

Who is Nana Ama McBrown?

Nana Ama is Felicity Ama Agyemang popularly known as Nana Ama McBrown was born on the 15th of August, 1977 in Ghana. Nana Ama McBrown attended ST. Peter`s International Residential School. After her success in basic education and senior high school, she furthered it at the College of Business of which she obtained the secretarial certificate.