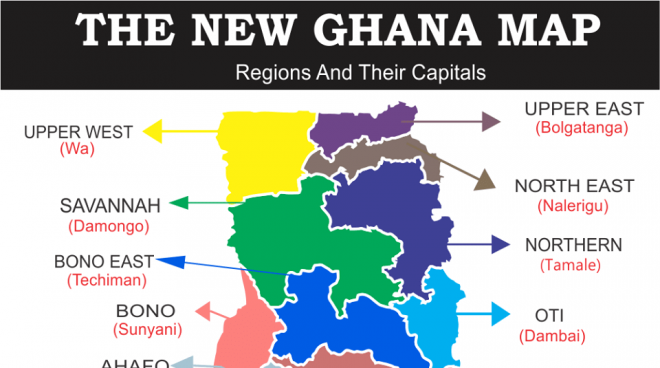 Present day Ghana was made up of 10 regions for over 30 years until the number was increased to 16 under the AkufoAddo administration to fulfill a campaign promise he made in the run up to the 2016 general elections.

However, by the time Ghana became a republic in 1960, the number had increased to 7 regions. This was as a result of the splitting of the Ashanti region into Ashanti and Brong-Ahafo regions in 1959.

The initial Northern region was also split into the Northern and Upper regions.

Western region was also split into the Western and Central region during the Second Republic hence increasing the number to 8.

The Greater Accra Law (PNDCL 26) of 23 July 1982 under the Provisional National Defense Council created the Greater Accra region. The Upper region was also divided into the Upper East Region and Upper West Regions in 1983 bringing the number of regions to 10.

Today’s article guide shall serve you with the List Of 16 Regions In Ghana And Their Capitals 2021 and all you need to know.

The number of regions moved from 10 to 16 after the December 2018 referendum. This was in fulfillment of a campaign promise made by President Nana Addo to further decentralize power in the country.

The referendum took place in 47 districts that were potentially going to be affected by the split. At the end of the votes, all proposed new regions were approved with a ‘YES’ votes above 99% in all regions and turnouts were from 80% to 90%.

16 regions in ghana and their capitals

The 16 regions in Ghana and their capitals are the ones given above for you.

the sixteen regions in ghana and their capitals

Before, Ghana was having ten (10) regions until there was a change in regions under the administration of His Excellency Nana Addo Dankwa Akufo-Addo — who brought sixteen (16) regions in Ghana.

how many regions are in Ghana and their capital

There are over sixteen (16) regions in Ghana.

what are the new regions in Ghana and their capitals

The regions in Ghana and their corresponding capitals are given above in this article guide.

RELATED:  What To Do If Your WASSCE Results Have Been Withheld