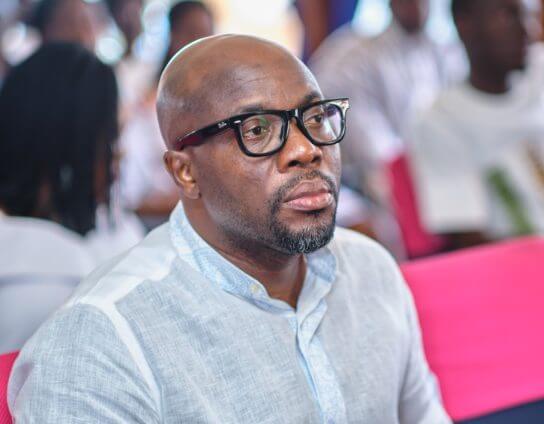 Not long ago was when the Multimedia Group’s General Manager for Joy Brands, Elvis Kwashie passes on and we are here to give you more about his biography and net worth.

“Elvis passed away at the University of Ghana Medical Centre (UGMC) on Tuesday night, December 28, 2021, after a short illness.”

Born on the 8th day of October 1972 at Asadame in the Volta Region Elvis Koku Kwashie lived and today we gather to mourn his death, and to celebrate his life. He will not be remembered by the things we write and say here today, but by the things we hold in our hearts.

As the first child of Olympio Yao Bonuedie and Mercy Adzo Torkornu-Bonuedie, Koku exhibited excellent leadership and brilliance right from his early school days all through to when he gained admission to Bishop Herman Secondary School, Kpando in 1984 and completed in 1991 with excellent grades not forgetting his great love for football which earned him a spot in the school’s football team.

In 1995, Koku gained admission into the Ghana Institute of Journalism (GIJ) and graduated in 1997 with a Diploma Certificate in Journalism. Which was followed by a certificated Course in Public Relations, Advertising and Marketing from the same Institute in August 1997.

In 1998, Koku participated in the BBC World Service Radio Journalism Course. In 2005, in Berlin Germany, he participated in the International Weiterbildung Capacity Building program in Multimedia and Online Journalism. A certificate of commendation was conferred on him from the MULTIMEDIA BROADCASTING COMPANY LTD as a member of the Winning Team (2006 BBC Africa Radio Awards – Local on-air campaign) in 2007.

RELATED:  God Answered Our Prayers, But Not In The Way We Expected – Children Of Late Elvis Kwashie

He later participated in the EXECUTIVE EDUCATION PROGRAM and also DEVELOPING AND LEADING HIGH-PERFORMANCE TEAM in 2017 at the Columbia Business School in the USA.

Koku was also given a Certificate of Achievement and Recognition from the MILLION LEADER MANDATE for his sterling leadership roles in ministerial affairs in 2014. Later in 2015 Koku gained Essential Skills in Oil and Gas at the Harvard College–HRDC-Boston USA.

In spite of his tight schedule, Koku did not renege on his duties in the Kingdom of God. He was a committed, devoted, dedicated and selfless individual who gave all to the Gospel of Jesus Christ.

Koku as part of his adult working life had short stints with then Groove FM, through to Network Computer Services (NCS), Metropolitan Insurance Company and finally settled at the Multimedia Group Limited (MGL) where he rose steadily through the ranks to become General Manager- JOY Cluster until his demise. His professionalism remains a testament.

December 28, 2021, will be a day this family will never forget… a day our maker called his servant Koku into eternal glory. During His short illness at the University of Ghana Medical Centre, Koku remained resolute and unwavering in the lord.

Elvis koku kwashie cause of death

Elvis Koku Kwashie had a short illness and hospitalized at the University of Ghana Medical Centre (UGMC) but unfortunately, Elvis passed away on Tuesday night, December 28, 2021.

He died at the Intensive Care Unit of the University of Ghana Medical Centre, as the Multimedia Group announced in a memo to staff.

RELATED:  ‘Elvis Kwashie Was A Classic Example Of How To Play Gatekeeping Role As Media Person’ – Mahama

For the full funeral and burial rites of late Joy Brands GM, Elvis Koku Kwashie, you may check the useful information here about:

Elvis Koku was blessed with a Godly wife Cynthia, and children; Seyram, Senam and Sedem

The wife of Elvis Koku Kwashie is the person of Cynthia Kwashie.

RELATED:  Elvis Kwashie Gave Me The Bravery To Work When I Felt Worthless In My Career – Kojo Yankson