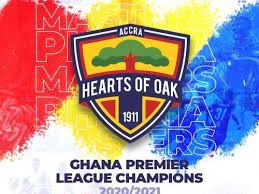 On November 11, 1911, the Accra Hearts of Oak sporting club was created in the then-Gold Coast. The club is known as the Phobians, but after they conquered Africa in the year 2000, they were dubbed the Rainbow Boy. The Premier League club is one of the most successful in the league.

The Ohene Djane Sports Stadium is where the team plays its home games (Accra Sports Stadium). Hearts of Oak won their first important match in 1922, when the Accra Football League was created by Sir Gordon Guggisberg, the governor of the Gold Coast. Hearts have won six of the league’s twelve seasons. Hearts joined the Ghanaian football league in 1956 and have been successful ever since.

Accra Hearts of Oaks S.C. was started in 1911 by a group of young men from Accra’s Ussher Town. They were all united in their goal to form a squad to take on the only other team in Accra at the time, The Invincibles. The group was mostly made up of young males from the James Town region. Duncan, a young guy from Saltpond, became the club’s first captain and used various training techniques to propel it to stardom. On November 11, 1911, the squad debuted their first jersey, thus establishing themselves as a Ghanaian club.

Hearts of Oak has risen to become Ghana’s most powerful club, earning the nickname Phobia. They have a long-running rivalry with Asante Kotoko, who are based in Kumasi, Ghana’s second largest city. Hearts of Oak has a rivalry with Great Olympics, a Ghanaian club with whom they share a stadium, the 40,000-seat Accra Sports Stadium.

The Ghana Premier League saw Accra Hearts of Oak win a lot of games, but their finest season was 2000-01. The team then went on to win the Ghana Premier League, the FA Cup, and the CAF Champions League. It was the first time they had won the Champions League (they had finished second in 1977 and 1979), and it was also the first time they had only lost one match throughout the competition. They defeated Espérance Sportive de Tunis on the road in the two-legged final, ending the Tunisian club’s 41-year unbeaten home record.

Hearts won the African Super Cup in 2001, as well as another league title, after winning the Champions League the year before. Hearts of Oak was formerly recognized as the eighth finest club in the world by CNN. The rest of the world was beginning to notice that Africa had some formidable soccer teams capable of competing with the best in the world. In 2004, Hearts won the CAF Confederation Cup, which is their secondary continental club competition. It was the competition’s debut year. In the final, they defeated arch-rivals Asante Kotoko, becoming the first African team to win both continental club competitions.