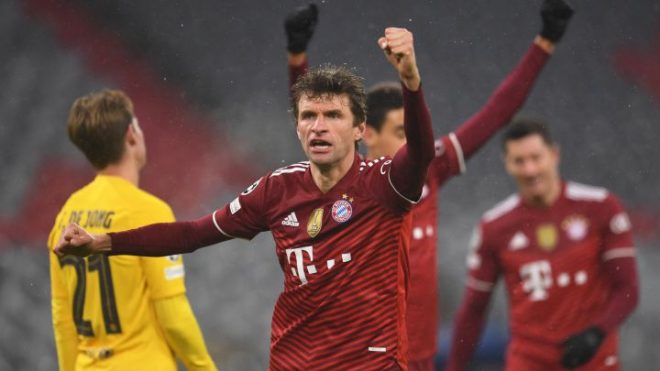 The popular Bayern Munich attacker, Thomas Muller was on the scoresheet as the German club dispatch Barcelona on Wednesday.

The Barcelona football club intended a win to sneak into the Champions League around 16 but the football team Bayern just won’t let them have any favours.

They simply outclassed the Spanish giants hammering them 3-0 and with Benfica grabbing a win against Dynamo Kyv means the once European heavyweight will now have to settle for the Europe League.

Muller’s has a first half strike that means he has scored over 8 goals in 7 games against the Catalan club.

Muller’s football goals has been noted to be more than what any other footballer has scored against them in the Champions League history.

You can now watch full video of Thomas Muller’s goal below.

Thanks for reading and watching this latest sports update as Thomas Muller Becomes The Player To Score More Goals Against Barcelona In UCL History.