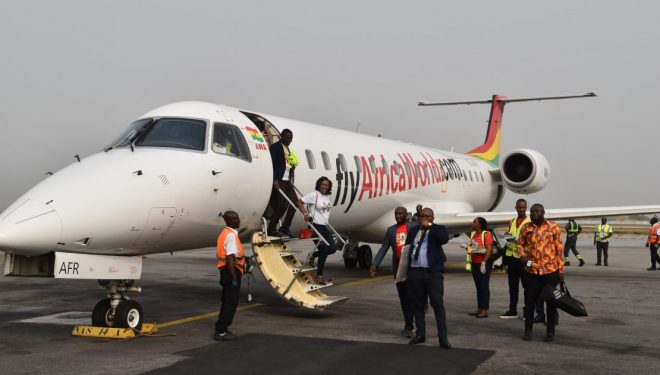 Africa World Airlines is a Ghanaian airline that was founded in 2010 and began flying in 2012. Togbe Afede XIV, a well-known Ghanaian investment banker, and traditional chieftain founded AWA. AWA is a joint venture between Ghanaian investors SAS Finance Group and SSNIT, with minority stakes held by HNA Group and China-Africa Development Fund via Zhongjia Investments of China.

Its headquarters is in Airport City Accra, and the Kotoka International Airport in Accra serves as its primary hub. The airline received its Air Carrier License from Ghana Civil Aviation Authority on 4 March 2011. However, it acquired its Air Operator Certificate on September 21, 2012, and began daily flights between Accra and Kumasi the following day. AWA started its first international flight linking Accra and Lagos’ Murtala Muhammad International Airport in December 2013.

AWA accomplished its first IOSA audit in May 2015, making it the only airline in Ghana to attain this international safety level. Following the completion of its second IOSA audit, AWA was accepted as a full member of IATA in 2017. By 2019, the airline had become the largest international carrier serving Nigeria, with 200 monthly flights to Lagos and Abuja.

With its dominance of the Nigerian regional travel industry and various collaborations with major airlines, AWA reinforced its position as the premier airline in Anglophone West Africa.